The Revealers is the first choice for middle schoolers who struggle with bullying — and for schools that want to address it. 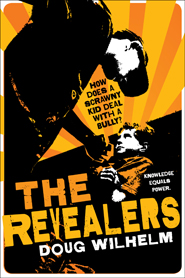 This realistic novel, with its strong story, lack of preachiness and cast of engaging, believable characters, has been used by over 1,000 schools to open up discussion and new understanding of bullying in adolescence, and of its real impacts.

The expanded, 2011 paperback edition of The Revealers includes a powerful new cover and an essay, “The Revealers in Schools,” about the creativity I’ve seen educators bring to working with my book — to raise awareness of bullying, make schools safer for kids, and promote a positive sense of empowerment in young people. The 2011 edition also has an in-depth author Q&A.

This section of the website is a rich resource center for schools and others that want to work with my book. Click here for model projects, study plans, and useful materials — all of them developed and tested in schools. Also please note the Downloadable Resources at lower left, and the news columns — including Anti-Bullying News — at right.

The 2012 sequel, True Shoes, centers on cyberbullying and is being read and discussed by schools around the country, even in South Africa! It features all the same characters, plus some new ones, as eighth graders now (Richie is in ninth grade in the sequel).

Click on the True Shoes tab above to learn more — and to look at Novel Connections, the multi-media curricum resource for working with True Shoes, and online supplementary materials, to spark discussion and build new awareness around online choice-making, both negative and positive.
Doug Wilhelm